Across the history of world cinema, the important impact of Soviet and Russian filmmakers is without question. And often, the US’s Motion Picture Academy has recognized Russian cinema for its excellence. Often people ask how many Oscars has Russia won? Well, here are all six of the Soviet and Russian movies that have so far won an Oscar. 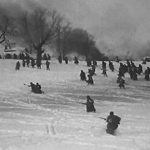 This movie, the Soviet Union’s first Academy Award, is still the only Russian-language winner of the Oscar for Best Documentary Feature.

The movie’s original name, “Разгром немецких войск под Москвой,” literally translates to “The defeat of German troops near Moscow.” It covers the Red Army’s defense during the important Battle of Moscow, October 1941 – January 1942.

In November 1941, a decree by Stalin ordered 15 front-line filmmakers to begin chronicling the battle, raging at times just 12 miles outside the Soviet capital. At the end of each day of filming, the documentary makers would return to a basement studio that doubled as a barracks.

Soon after the Soviets had carried the field of battle, the film was released on February 23, 1942. It won an Oscar in 1943 and was also awarded the Stalin Prize.

If you’re interested in more Soviet WWII documentaries, truly the best is the five-part Liberation series, created 1970-1972: I: The Fire Bulge, II: The Break Through, III: Direction of the Main Blow, IV: Battle For Berlin, and V: The Last Assault. 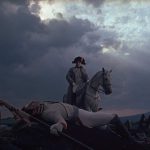 This four-part epic, based on the novel of the same name by Leo Tolstoy, is one of the highest-budget and longest films in the history of world cinema.

The result of all this effort completely and utterly wowed audiences around the world. And not only did the film win the Oscar for Best Foreign Language Film, but it also was nominated for Best Production Design. The team shooting War and Peace developed some interesting cinematography innovations as well. For example, during the Battle of Borodino mega-scene, they mounted a camera on a 120-meter cable car. And during the glitzy ball scene, the cameraman stood on roller skates while filming. 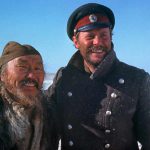 Dersu Uzala is a Soviet-Japanese co-production directed by one of the most influential filmmakers of all time, Akira Kurosawa. The story of how Kurosawa got involved in this movie is in and of itself interesting.

In 1971, during a low time in his career, Kurosawa attempted suicide. Japanese film studios were denying him film opportunities and he was feeling creatively bereft.

But in came the Soviets. The largest Russian studio, Mosfilm, approached Kurosawa the following year and initiated a conversation about working together. In 1973, they agreed to a deal whereby Kurosawa would retain absolute creative control over the film they made together. And so, Dersu Uzala was born.

The film tells the story of a Russian explorer and a trapper he meets in the Russian Far East. It touches on a number of issues: the relationship between civilization and nature, a person’s place in the world, problems of faith, growing old, and more. It’s well worth the watch. And happily Dersu Uzala helped reignite Kurosawa’s career and belief in himself. In his statement on receiving the Oscar for Dersu Uzala he said, “I will continue making films until my very last day.” 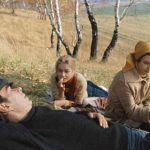 This wonderful film directed by Vladimir Menshov describes with penetrating accuracy the lives of regular Soviet people. Actually, it’s often described as the movie that best depicts the famous Russian soul – “russkaya dusha.” US President Ronald Reagan himself watched it before meeting with Mikhail Gorbachev to better understand his counterpart.

The movie’s plot revolves around three young women who move to Moscow to make careers for themselves and find a husband. In the end, their ups and downs show there is no universal way to find happiness or construct a meaningful life. If you’re an American watching this movie, you might find yourself struck by the similarities between it and all-American classics, like Sex and the City. 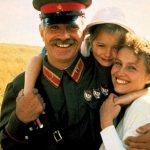 Watch Burnt by the Sun here on Russian Film Hub

Although technically this movie sits as the first of director Nikita Mikhalkov’s “Burnt by the Sun” trilogy, it has been the only successful one of that group. The film describes the last happy summer the family of a Civil War hero enjoys before Stalin’s purges descend on the Soviet Union. It’s a really great film and received a lot of love in the festival circuit. Not only did it win the Best Foreign Film Oscar, but it also took the Grand Prix at the Cannes Film Festival.

Many people who are interested in this movie approach it out of a curiosity in Stalin’s purges and general Soviet repression. If that sounds like you, I’d like to recommend you check out Georgian director, Tengiz Abuladze’s 1987 film, Repentance. It provides a much sterner criticism of Stalinism than Burnt by the Sun – and doing so in the 1980s is in and of itself interesting. 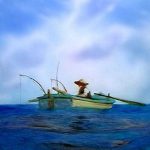 It took Russian director and scriptwriter, Alexander Petrov, two years to create this 20-minute masterpiece. Based on the Ernest Hemingway novel, this animation uses the painstaking and difficult technique of glass painting to produce stunning seascapes and character visuals.

Just generally, Russian animation has an amazing history of excellence. If you’re curious to explore more, please, please watch Hedgehog in the Fog. It’s considered by many to be the greatest animation ever – winning first place at the 2003 Laputa Animation Festival.