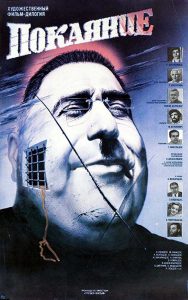 Repentance is a Georgian film made by the masterful director, Tengiz Abuladze. Its name is მონანიება (Monanieba) in Georgian and Покаяние (Pokayaniye) in Russian.

Although the film was produced in 1984, it was only released in 1987 because of its heavy criticisms of Stalinism. However, once the film was released, it was very well received in the Soviet Union and abroad. It cleaned up six prizes at the Nika Awards in Moscow. It also won the FIPRESCI Prize, Grand Prize of the Jury, and Prize of the Ecumenical Jury at the 1987 Cannes Film Festival.

Repentance is the final film in Abuladze’s trilogy of movies which also includes The Plea and The Wishing Tree.

In a small Georgian town, the former mayor, Varlam Aravidze dies. And so, the town holds a funeral.

However, the day after the funeral, and then every day thereafter, someone digs Aravidze’s corpse up from his grave and dumps it in his son, Abel’s garden.

Eventually, Abel and the authorities find out who has been digging up Varlam’s grave. The grave robber is a woman, Ketevan Barateli, who says that Varlam doesn’t deserve to be buried because of the atrocities he carried out as mayor. She shares that when she was a child, Varlam arrested and killed her parents under false pretenses. She shares that this reign of terror affected many other families as well.

Abel vigorously denies the accusations against father. He even tries to have Ketevan delcared insane. However, Abel’s own son, Tornike, believes Keteven. Distraught at the revelations about his grandfather, he commits suicide. After that, Abel himself throws his father’s corpse off a cliff.

Nano Ochigava
Ketevan as a child