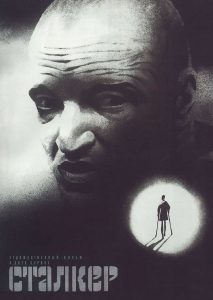 Stalker (Сталкер) is a brilliant 1979 Soviet sci-fi film directed by Andrei Tarkovsky. Loosely based on the Strugatsky Brothers’ 1972 novel, Roadside Picnic, the movie tells the story of three characters’ – Stalker, Writer, and Professor – expedition into the Zone. Their goal is to reach the Room, a place which grants visitors their most cherished desires.

Please note, this wonderful movie is available free to view in all countries except for the USA, UK, Canada, India, and Australia.

The Stalker (Aleksandr Kaydanovskiy) lives on the edge of a dilapidated industrial landscape – the Zone. Under his leadership, a Professor (Nikolay Grinko) and a Writer (Anatoliy Solonitsyn) embark for this mysterious, god-forsaken terrain. Their goal is to reach a place there called the Room. It’s said that entering the Room fulfills visitors’ most secret desires.

Importantly, the different motives of the Writer, Professor, and Stalker only become truly apparent once they reach this mysterious place. And so, their expedition becomes a journey into the inner world of the protagonists, providing an insight into the failure of a civilization.

Stalker, the fifth film of Andrei Tarkovsky, is a journey into the depths of the human inner world encoded in symbolic-aesthetic images. All of the events in the story, based on the novel, Roadside Picnic, by the Strugatsky Brothers, are at the same time mysteriously veiled and philosophically challenging. In this way, Tarkovsky illustrates a hike into the unconscious of modern man.

The first version of Stalker become unusable due to improper handling in the film lab. Because of this, after much work, Tarkovsky and his team had to start all over again. It is said that cinematographer, Georgy Rerberg, was responsible for this.

The idiosyncratic aesthetics of the final work, which refuses any superficial reading, compelled Tarkovsky to emigrate from the Soviet Union in 1982.

In some dark future, a meteorite or perhaps even extraterrestrial visitors have destroyed an industrial landscape. This area is now sealed off by the military and nature takes back for itself this legendary Zone. However, the Stalker (Aleksandr Kaydanovskiy) continues to enter the Zone.

While usually people pay the Stalker money to lead him in, he himself also has the insatiable urge to return again and again. This is a source of much annoyance to his wife (Alisa Freyndlikh), who long remains alone with their daughter in their small, ramshackle apartment.

Again the Stalker enters the Zone. This time, he serves as a guide for two anonymous clients – we only know them as the Professor (Nikolay Grinko) and the Writer (Anatoliy Solonitsyn).

Having successfully sneaked past the guards and entered the zone, the three men make their way through the apocalyptic-looking zone in search of a legendary room – the Room. There, it is said, visitors’ most cherished desires will be granted.

In the Zone, the normal laws of reality do not apply. It is an area full of dangers that the Stalker tells his clients are invisible to all non-Stalker eyes. Their journey is slow. The Stalker never leads them along the straight path; instead they wind through the landscape based on the Stalker’s senses and tests for traps.

Through the journey, the three men talk and share their motives for visiting the Room. The Stalker shares the story of a previous Stalker, called Porcupine, who committed suicide after successfully reaching the Room. Eventually, they make it there, but I won’t spoil what happens…

Many have come to view Tarkovsky’s film as a foreshadowing of the Chernobyl disaster of 1986. As part of that, many of the people who are in charge of taking care of the exclusion zone that surrounds the old power plant in Pripyat, Ukraine often called themselves “Stalkers.” Also, interestingly enough, one of the most well-known influences of Stalker is the 2007 video game, S.T.A.L.K.E.R.: Shadow of Chernobyl. Tarkovsky himself, however, died eight months after Chernobyl, so he never had much to say in way of comparison of his film and the disaster.

When officials from Goskino, the Soviet cinema committee, shared their concerns with Tarkovsky that audiences found the film too slow, he had a sharp retort.

“I am only interested in the views of two people: one is called Bresson and one called Bergman.”

With time, though Stalker has come to be seen as one of the greatest movies of all time. It placed 29th in the BFI’s Greatest Films of All Time list. And to this day, the movie enjoys a cult following around the world. Of all Tarkovsky’s masterpieces, Stalker is generally considered his greatest by critics.

Stalker sold 4.3 million tickets at the box office in the Soviet Union.

At the 1980 Cannes Film Festival, Stalker won the Prize of the Ecumenical Jury. In the 1983 Fantasporto festival in Portugal, it won the Audience Jury Award – Special Mention. 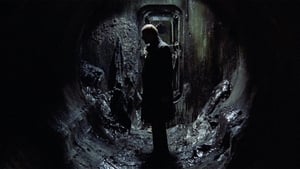