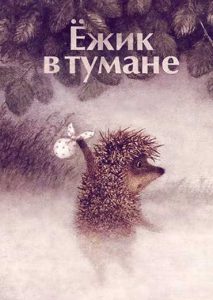 Hedgehog in the Fog (Ёжик в тумане) is a 1975 Soviet animated film directed by Yuri Norstein. It is unquestionably a masterpiece.

Hedgehog in the Fog is considered by many to be the greatest animation ever. It was voted best animated film of all time in a poll of 140 animators from across the world at the 2003 Laputa Animation Festival. And, for what it’s worth, one of Norstein’s other films, Tale of Tales, came second in that poll. Clearly, then, Norstein produces incredible work.

Norstein’s impressionistic filmmaking really makes you feel just like the hedgehog, even though the story is narrated from a third person perspective. I bet you you’ll feel entranced, in a zen state during this short, 10-minute film.

But don’t get too comfortable, art house lovers! You’ll have a lot to keep your eyes peeled for in this animation. Whether it’s its frame-by-frame mimicry of the first few minutes of Andrei Tarkovsky’s Solaris or the clear similarities between this hedgehog’s fog and that of Federico Fellini’s in Amarcord, Hedgehog in the Fog sits there with the greats.

Hedgehog in the Fog plot

Hedgehog sets out to visit his friend, Little Bear, for their daily sessions of tea with jam and counting the stars. However, he gets lost in a thick fog and swirl of mysterious events.

On his way, he sees a white, luminous horse in the fog and is intrigued. He steps into the fog and soon loses his bearings.

“If the horse lies down to sleep, will it drown in the fog?”

Hearing a voice in the distance, Hedgehog frantically rushes from side to side until he falls into a river. He floats downstream until “Someone Silent” («Кто-то беззвучный») helps him ashore, where Little Bear finds him.

While Little Bear speaks, sharing how he was worried sick looking for his lost friend, Hedgehog thinks about how happy he is to be with him.

“It’s good that we are together again.”

Hedgehog in the Fog illustrated book

There’s also a gorgeous illustrated book of Hedgehog in the Fog, which you can find here on Amazon. It captures the same, innocent magic of the animation and could be a wonderful treat to share with your kids.