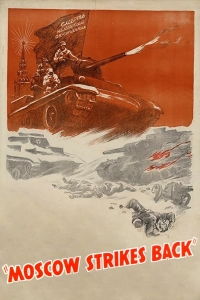 This movie, the Soviet Union’s first Academy Award, is still the only Russian-language winner of the Oscar for Best Documentary Feature.

The movie’s original name, “Разгром немецких войск под Москвой,” literally translates to “The defeat of German troops near Moscow.” It covers the Red Army’s defense during the important Battle of Moscow, October 1941 – January 1942. Be warned, the film does include graphic images.

In November 1941, a decree by Stalin ordered 15 front-line filmmakers to begin chronicling the battle, raging at times just 12 miles outside the Soviet capital. At the end of each day of filming, the documentary makers would return to a basement studio that doubled as a barracks.

Soon after the Soviets had carried the field of battle, the film was released on February 23, 1942. It won an Oscar in 1943 and was also awarded the Stalin Prize.

If you’re interested in more Soviet WWII documentaries, truly the best is the five-part Liberation series, created 1970-1972: I: The Fire Bulge, II: The Break Through, III: Direction of the Main Blow, IV: Battle For Berlin, and V: The Last Assault. What’s nice about this version of Moscow Strikes, Back, though, is that it is narrated in English.