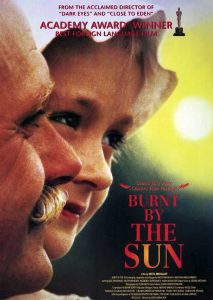 A moving and poignant story set against the corrupt politics of the Stalinist era.May. 01, 1994Russia135 Min.R
Your rating: 0
8.1 19 votes
DramaFree

Burnt by the Sun is a spellbindingly tragic story. The film depicts the Great Purge that took place during the late 1930s in the Soviet Union. Created in 1994, this was one of the first post-Soviet movies to examine this period, free from Soviet censorship.

It’s the summer of 1936, and life looks utterly idyllic in the Soviet Union. The film begins showing the family life of revolutionary war hero Colonel Kotov spending quality time with his family in the countryside. However, this is all soon to change with the unexpected arrival of their cousin Mitya from Moscow.

Though Mitya is all charming and entertaining, Kotov knows that something is afoot. It’s the time of Stalin’s repression, after all. And, what’s more, it was Kotov who conscripted Mitya into the secret police in the 1920s and then stole his fiancee.

Kotov is right – Mitya has come to arrest him as part of some trumped up charge. Though Kotov believes his personal relationship with Stalin will save him, he is eventually arrested and killed. Thereafter, Kotov’s wife – Mitya’s ex-fiancee – is arrested and sent to the gulag, where she dies. Mitya, meanwhile commits suicide.

The film won the Grand Prix at the Cannes Film Festival in 1994 and the Oscar for Best Foreign Language Film in 1995.

Burnt by the Sun proved to be very popular in Russia, becoming the most sold video for 48 consecutive weeks. Famously, the film was aired on Russian national TV during the prime time slot the night before the 1996 Russian presidential election. Quite possibly, this could have been an attempt by the incumbent Boris Yeltsin to discreit the Communist Party’s candidate, Gennady Zyuganov’s Communist Party. 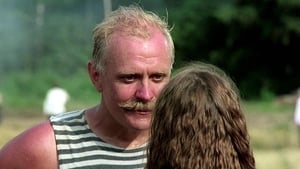