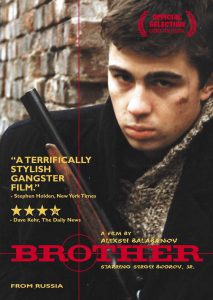 Brother, aka Brat, is without a doubt the greatest cult classic film to emerge from post-Soviet Russia. Set in the troubling 1990s, Brother pits gritty antihero, Danila, against various organized crime syndicates in lawless St. Petersburg.

After completing his national service in the Russian army, Danila returns home and doesn’t know what to do. His mother recommends he goes to St. Petersburg to get help from his successful brother. And so, he moves there.

We soon discover that Danila’s older brother is a gangster and assassin. Danila soon follows his example and becomes an assassin as well. Along the way, he forms new relationships and becomes a fan of the rock band, Nautilus Pompilius. For what it’s worth the Brother soundtrack is simply superb – re listening to it really brings you back to this magnificent movie. If you’re interested in listening to songs from Brother, listed by when and where they show up in the film, we’ve written about the Brother soundtrack here.

Anyway, back to the movie. As you might imagine, after some time, Danila comes to realize that killing has become too easy for him. But that’s before he’s asserted his dominance as the baddest of banditi in town.

If you enjoy this mesmerizing film (and you will), please also consider watching the sequel – Brother 2.