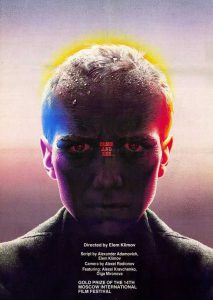 Come and See (Иди и смотри) is renowned Soviet director, Elem Klimov’s final feature film. It takes place in Belarus during WWII and tells the story of the horrifying treatment of locals by German soldiers on the Eastern Front. The movie is truly one of the most devastating works of art made about about anything ever.

Contents hide
1 Where to watch Come and See
2 Background to the film
3 Come and See plot
3.1 Hell on earth
3.2 Resolution to the madness
4 Reception of Come and See
4.1 Critical response and awards
4.2 Quality film reviews
4.3 Podcast episodes
4.4 Video essays

Where to watch Come and See

How to watch Come and See online?

Come and See (Иди и смотри / Idi i smotri) is a harrowing Soviet war movie directed by Elem Klimov in 1985. The film is based on the 1978 novel, I Am from the Fiery Village (Я из огненной деревни / Ya iz ognennoj Derevni) by Ales Adamovich. Together Klimov and Adamovich wrote the film’s screenplay.

The film has come to be considered one of the greatest war films of all time. The best way to describe it is that it’s an amazing film that will ruin your day. It’s just one of the most devastating movies there is. So, be warned – Come and See is not of the same ilk as Klimov’s other most famous movie, the uproarious comedy, Welcome, or No Trespassing.

The way in which Come and See was made gives some indication to how horrific it is to view. The shoots were dangerous – real flamethrowers and real bullets were used just feet away from actors. These difficult scenes changed the actors considerably over the course of filming. Aleksei Kravchenko, who played the lead, Flyora, as a 13-year-old, developed a full head of grey hair and wrinkles during the nine months of filming.

Come and See is so nightmarish that it depicts an earthly hell. In fact, the film’s name is an allusion to the refrain from the Book of Revelation and its description of the apocalypse. This view of the Second World War as an apocalypse fundamentally distinguishes the movie from previous works of Soviet war cinema. They would traditionally present the events of the war in either a heroic or lyrical manner. Klimov, however, presents a view of the war as a world of madness and demonic possession.

Not only people, but also animals are drawn into this horror. We see a stork soaked in the rain, standing motionless in the forest. It has nowhere to go and no one to fly to with glad tidings. Later, we witness the dying spasms of a cow ripped apart by a machine gun.

The film attacks every sense possible, including sound. The loud crashing of bombing and gunshot deafens your ears. Meanwhile, emaciated human voices appear muffled and distorted by some sort of eternal ringing noise. Ordinary sounds are not safe, as they transform into ominous signs. Flies buzzing becomes a harbinger of a terrible pile of corpses slaughtered in Flyora’s village.

Amid the sensory overload of the movie, sometimes a line will jump out that makes your skin crawl. Amid a thunderous cacophony of barking dogs, roaring engines, curdling wails, billowing flamethrowers, and chattering machine guns, a German soldier directly addresses the viewer:

“You should not be. Not all nations have a right to the future. ”

Resolution to the madness

But Come and See is not just a chilling nightmare. It is much more profound than just that. The film’s resolution displays its message of the indestructibility of good and humanity.

Having survived the horror of a barn full of villagers being burnt alive, Flyora takes a rifle and shoots a portrait of Hitler. Each shot by this now gray-haired, wrinkled teenager seems to turn back time in a newsreel of Hitler’s life. And the younger he appears, the more violently Flyora continues to fire.

That is, until a photograph of Hitler as a child appears – a defenseless baby sitting in the arms of his mother. Seeing this, Flyora freezes in horror and then lowers his gun. His inability to shoot a child, no matter who he is, restores the world in tragic harmony.

Reception of Come and See

From its first release, Come and See received a highly positive critical reception. And as the years go by, it keeps on getting applauded by critics.

J. Hoberman of The Village Voice has said, “There are few images more indelible than the sight of young Alexei Kravchenko’s fear-petrified expression.” Scott Tobias of The A.V. Club has written that Klimov’s “impressions are unforgettable.” Meanwhile, Roger Ebert has described it as “one of the most devastating films ever about anything, and in it, the survivors must envy the dead.”

In happy news for an unhappy movie that fought years of censorship to be produced, Come and See movie won the Golden Prize and FIPRESCI prize at the 1985 Moscow International Film Festival. 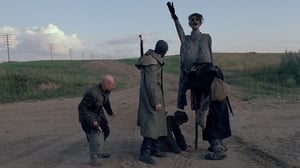