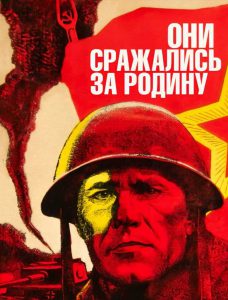 Sergei Bondarchuk’s They Fought for Their Country has often been called the best film about WWII.

In the summer of 1942, the Soviet Union was on the verge of defeat. German troops, coming off major successes near Kharkov, are launching a large offensive on the southern flank of the Eastern Front.

Meanwhile, many Soviet soldiers are retreating and many civilians are forced to fend for themselves. Torn to pieces in fierce fighting, but still strong in spirit, a Red Army rifle regiment attempts to protect a bridgehead at the Don River to give their comrades room to flee.

They Fought for Their Country features the sublime directing of Sergei Bondarchuk as well as a star-studded cast, including Vasiliy Shukshin, Vyacheslav Tikhonov, Yuriy Nikulin, Georgi Burkov, Nonna Mordyukova, and Innokentiy Smoktunovskiy.

And of course, the story itself is based off the unfinished novel by Nobel Prize-winning author, Mikhail Sholokhov, of Quiet Flows the Don fame.