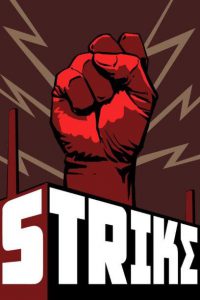 Strike is director, Sergei Eisenstein’s first feature film and is a true masterpiece of world cinema. In it, Eisenstein gave full vent to his unbridled imagination and applied completely new principles and technologies of cinema. It’s also the film that launched the famous tandem of director, Eisenstein and cameraman, Eduard Tisse. Together they would go on to make other great films like Battleship Potemkin, October, and Alexander Nevsky.

The film is perhaps most famous for a montage sequence towards its end when a crowd being attacked is cross-cut with a cow being slaughtered. The most enduring theme from the film, though, is the focus on the collective instead of the individual – something Eisenstein would continue to elaborate on in his later work. Watch out – though, Eisenstein’s focus on the teaming masses and abandonment of the supporting narrative structures of main characters and plot can make Strike tricky to follow.

The film depicts a strike that breaks out in a pre-revolutionary Russian factory after the suicide of one of its workers. The worker had been accused of stealing equipment and so hung himself in shame. After these events, the latent collective dissatisfaction of the factory’s workers bursts into the open and they petition management to improve working conditions. However, the cynical managers ignore these demands and organize a provocation. They hire some strongmen to make it look like the striking proletarians have launched arson and a pogrom on a wine shop during a peaceful demonstration. The next day, by order of the governor, Cossacks and the police are sent to suppress the strikers.

The film then ends with the credits: “Remember, proletarian!” The message is that the viewer should never forget the message of the Lenin quotation that opens the film:

“The strength of the working class is organization. Without organization of the masses, the proletarian is nothing. Organized it is everything. Being organized means unity of action, unity of practical activity.”

I. Ivanov
Chief of Police