The mighty epic of 13th Century Russia...of the "Battle on the Ice" when the invading German hordes led by the Teutonic Knights were driven from the soil of Russia - forever.Nov. 24, 1938Soviet Union109 Min.Not Rated
Your rating: 0
9.5 19 votes
DramaFreeHistoryWar

Alexander Nevsky (Александр Невский) is a 1938 Soviet classic directed by Sergei Eisenstein. The film depicts famed Russian historical figure, Prince Alexander Nevsky’s defeat of the invading Teutonic Knights in the 13th century. People have long remembered Alexander Nevsky because of its memorable scenes, like the Battle on the Ice, and its rousing score by Sergei Prokofiev. The movie helped energize the Soviet Union with anti-German, patriotic fervor during the Second World War.

The film depicts the 13th century invasion of the Russian city state of Novgorod by Germanic Teutonic Knights. As you can imagine, there are many parallels with the German invasion of the Soviet Union that took place three years later.

The film is divided into 12 episodes revolving around two interconnected stories. The plot largely revolves around the Novgorodrian’s defense under Nevsky against the invading Teutonic Knights. A secondary story line concerns the rivalry between two Novgorodrian warriors, Vasili and Gavrilo.

With the assistance of a local traitor, Tverdilo, the Teutonic Knights capture the Russian city of Pskov. The Teutons torture and kill the local Russians, even burning babies and children alive.

Following the devastation of Pskov, Nevsky rallies the people of Novgorod to fight off the Teutons. Vasili and Gavrilo, meanwhile, find a way to settle their rivalry. Their common love interest, Olga, tells them she will choose the one who shows himself braver in battle with the Teutons.

The Novgorodrians meet the Teutonic Knights at a frozen lake and do battle in the memorable “Battle on the Ice” sequence. During the battle, Vasilisa, daughter of the recently murdered leader of Pskov, fights alongside Vasili and shows great courage.

After Novgorod wins the battle, Vasili declares that the bravest was Vasilisa, followed by Gavrilo. And so, Gavrilo wins Olga’s hand in marriage. Vasili himself chooses Vasilisa for himself. 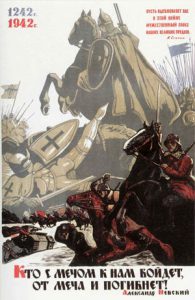 “Whoever comes to use with the sword, will die by the sword!”

Context behind the film

Alexander Nevsky was Eisenstein’s first completed film in about a decade. Before he started shooting the movie, he actually was close to being exiled from Soviet filmmaking permanently.

The success of Alexander Nevsky did much to rehabilitate Eisenstein with Soviet authorities. When the movies was first released in 1938, it achieved great success and popularity across the Soviet Union. Eisenstein himself received the Stalin Prize and an honorary doctorate for his work. Perhaps that was helped by him writing a newspaper op-ed likening Stalin to Nevsky.

Anyhow, the film did have its setbacks as well. After the August 23rd, 1939 signing of the Molotov-Ribbentrop Pact, it was taken out of circulation. The film costumes’ obvious references to the contemporary German – including swastikas and Prussian-style helmets – were deemed to endanger this non-aggression pact with Nazi Germany.

However, within a few short years, the film made a roaring comeback with the beginning of Operation Barbarossa on June 22nd, 1941. The way in which the common of people of Novgorod came together to defeat the invading Teutons was seen as a worthy example of Soviet values. As a result, Soviet authorities started creating and distributing many propaganda posters comparing Nevsky’s triumph with the Red Army’s fight with the Nazis.