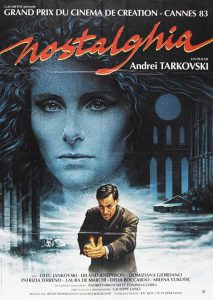 Nostalgia is a timeless masterpiece of cinema. You can feel Tarkovsky pushing the boundaries of cinema as well as cementing his own unique style in this his penultimate feature film. Shot in Italian and Italy, Nostalgia is Tarkovsky’s first feature film during his period of exile from the Soviet Union. After completing Nostalgia in Italy, he would go on to shoot his final feature film, The Sacrifice, in Sweden in 1986. He would pass away the same year, never to return home.

The film tells the story of a Russian poet, Andrei Gorchakov, as he journeys through Italy. He is accompanied by his guide and translator, Eugenia. The purpose of his trip is nominally for researching life of an 18th-century Russian composer. However, it soon turns into a journey through Andrei’s inner world, emotional truths, and history.

Soon, it becomes clear that Andrei feels ambivalently towards Eugenia, his guide, and Italy in general. In a series of dream sequences, we see his deep nostalgia for his homeland and wife. Of course, this feeling cannot have been dissimilar to Tarkovsky’s own, as he carried out his exile from the Soviet Union. Writing in his book, Sculpting in Time (here on Amazon), Tarkovsky wrote that he wanted Nostalgia to be “about the particular state of mind which assails Russians who are far from their native land.” Instead of finding inspiration in a whole new country’s cinematic material, Tarkovsky opted to peer at the universe within.

Often criticized for disregarding the viewer with his drawn-out, testing movies, Tarkovsky has made in Nostalgia perhaps his most opaque film of all. At the same time, though, it is probably his most personal. The connection between Andrei Gorchakov and Andrei Tarkovsky is unmistakable. Two artists, far from home, experience a soul-searching and brush with madness like no other. Much like when the character, Domenico, explains how “One drop plus one drop makes a bigger drop, not two,” so the artist (Tarkovsky) and the madman (Tarkovsky) understand each other – because they are part of the same person.