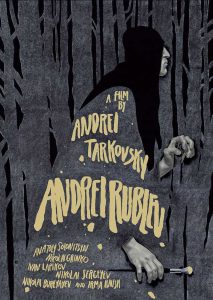 Andrei Rublev (Андрей Рублёв) is Andrei Tarkovsky‘s second feature film. It is based on the life and times of 15th-century icon painter, Andrei Rublev, one of Russia’s most celebrated artists.

Even though the film was shown at Cannes in 1969, Andrei Rublev only had one viewing in the Soviet Union in Moscow in 1966 before a censored version was released in 1971. Soviet authorities shelved the film because of arguments over the film’s perceived inadequacies and lack of patriotism. And these controversies continued for many years.

However, critics of Andrei Rublev too often made the mistake of trying to understand the film as if it were purely part of the traditional historical and biographical genre. This thing is, this sort of framework is too narrow for Tarkovsky’s multi-figured canvas. Only with time would more and more people begin to understand the true extent of this sublime work.

The idea to turn to the period of the Middle Ages and the central figure of the Russian Pre-Revival came to Tarkovsky partly because of the widespread interest in ancient Russian art that re-emerged during the mid-fifties. In 1960, the 600th anniversary of Andrei Rublev’s birth, celebrations were held and the Museum of Old Russian Culture officially opened in Moscow. Within a year, Tarkovsky had submitted an application to shoot a film about the great icon painter.

More than a historical film

Tarkovsky did not hide the fact that his goal was not to create a purely historical film. In his own words, he said:

“Rublev’s biography is a complete mystery. We do not want to solve the mystery of his fate. Rather, we want to see that beautiful and difficult time through the eyes of the poet [Rublev], when the great Russian people were becoming stronger and squaring their shoulders.”

Thus, Tarkovsky gained two attractive opportunities from depicting Andrei Rublev. By focusing on the path of an individual artist, he could develop a metaphor for the path of the artist in general (particularly during difficult times). Also, thanks to the lack of factual material on Rublev’s life, Tarkovsky could take the plot wherever he wanted, instead of being stuck inside the boundaries of widely known biography.

The role of the artist

The path which Tarkovsky took the film centers around a number of key themes. In Tarkovsky’s words:

“The artist and the people, the artist and time, where the artist does not exist by himself, but is the conscience of a society, the cutting edge of his imagination, and a spokesman for talent.”

The path of the artist cannot be separated from the fate of the Russian people in this movie. Rublev and the Russian people are divided and tormented by ideological and political strife (persecution of pagans, reprisals of the Grand Duke’s men, Mongol Tatar raids, conspiracy by the Prince against his own people, desecration of the church, mass murder in Vladimir). All in all, the Russian people are represented as martyrs. Rublev himself in an argument with his ideological opponent, Theophanes the Greek, likens the Russian peasant to Christ, humbly bearing his cross.

The artist, too, suffers. And it is the suffering artist who can take the Russian people beyond the chaos the Middle Ages. The protagonist of the final episode, The Bell, is an impoverished, homeless teenager, Boriska. He leads the effort to build a bell, despite himself not knowing how it’s done. In the end, though, his ingenuity and artistry brings about a bell whose majestic ringing serves as a sign of popular unification and rebirth. So, from the chaos of the Middle Ages, the Russian nation and Russian identity was born. As an analogy to Tarkovsky and the Soviet period, this is really striking.

Andrei Rublev consists of eight episodes, as well as a prologue and epilogue. The episodes are as follows:

With time, Andrei Rublev has come to be recognized as one of the most important movies of all time. However, it struggled to get initial exposure. The politically ambiguous themes it explored, like religion, artistic freedom, and the role of the artist meant that Soviet authorities were reluctant to distribute it domestically as well as internationally.

This 1966 film received one screening in Moscow that year, and a second viewing only came at the 1969 Cannes Film Festival. However, there Soviet officials made sure it was not shown as part of the regular competition, ensuring it would not be eligible for the main prizes. Nevertheless, Andrei Rublev did win prizes from elsewhere in Europe, including the FIPRESCI prize of international film critics, the Jussi Award in Finland, and the Critics Award from the French Syndicate of Cinema Critics.

In the US, the film arguably received worst luck. When it was first shown – at the 1973 New York Film Festival – its distributor at the time, Columbia Pictures, cut 20 minutes from the movie, awkwardly truncating Tarkovsky’s original intent. It’s said that because of this, American film critics didn’t initially welcome Andrei Rublev so friendly.

It’s not all bad news, though. Today, Andrei Rublev is rightfully celebrated as the masterpiece it is. It places 26th on the BFI 100 Greatest Films of All Time. Elsewhere, it’s also celebrated: Empire magazine’s 87th best film of world cinema, The Guardian’s 2nd best film of all time, and 87th in the Toronto International Film Festival’s Essential 100. 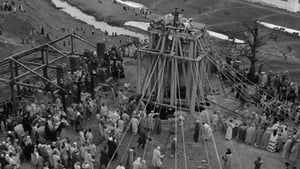