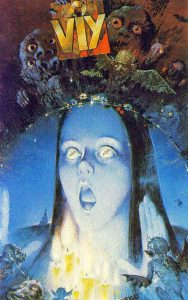 Viy is generally considered the most famous Russian horror film – really one of the few in a country that has experienced far too much real life horror. You can watch it above, but for English subtitles, you’ll have to go use Amazon here.

In this delightful film based on the Gogol tale of the same name, a young priest attempts to save the soul of a witch with which he has a sordid backstory. The film begins with the young monk , Khoma, wandering through the countryside on leave from his monastery. Lost in the dark, he is able to spend the night in an old woman’s barn. However, she turns out to be a witch. After an altercation between them, Khoma slays her, expecting that to be the last he sees of her.

Soon after, a local nobleman summons Khoma to his village to pray for and save the soul of his recently deceased daughter. To do this, Khoma must stay up all night in a locked church and pray for her salvation. However, during these nights Khoma must face up against witches and monsters, scaring him to death. Watch this always atmospheric, sometimes ridiculous film to see if the witch is able to exact her revenge on Khoma.

Aleksey Glazyrin
Sotnik (as A. Glazyrin)