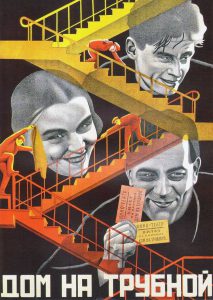 The House on Trubnaya is one of the finest silent films to come out of the Soviet Union in the late 1920s. It’s a prime example of the deftly blended comedy of director, Boris Barnet, which you can find in other of his works, like By the Bluest of Seas and Moscow That Weeps and Laughs.

The movie is set in Moscow in the midst of the New Economic Policy period. The petty-bourgeois public arranges their bourgeois life, full of vanity and gossip, in a house on Trubnaya Street. One of the tenants, the owner of a hairdressing salon, Golikov, is looking for a housekeeper – modest, hardworking and not a member of a trade union. The village girl, Parasha seems to him to be a suitable candidate for exploitation. Soon, though, the house is shaken by the news that Parasha has been elected a deputy of the Moscow City Council from the maids’ union.