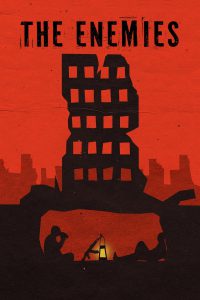 The Enemies (მთებრი) is a recent Georgian film set during the Georgian-South Ossetian conflict, part of the Russo-Georgian War of 2008. While searching a rural town in South Ossetia, a group of Georgian soldiers hear noises coming from a house’s basement. Their leader instructs his troops to search the surrounding area, and himself stays by the basement. Suddenly, however, a bombardment starts wrecking havoc around them, and so the Georgian commander jumps into the basement. He manages to get away from the artillery fire, but now finds himself trapped underground.