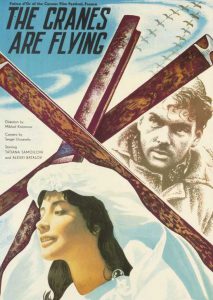 The Cranes Are Flying (Летят журавли / Letyat zhuravli) is a 1957 Soviet film directed by Mikhail Kalatozov. It is set mostly in Moscow and the Soviet home front before and during the Second World War. The film’s plot is loosely based on the play by Viktor Rozov, Eternally Alive (Вечно живые).

Unfortnately, we no longer have a version available with English subtitles. If you’d like one, we recommend you check out The Cranes Are Flying DVD on Amazon.

Why you should watch The Cranes Are Flying

The film came about during a time of great change in Soviet cultural history. Following the death of Stalin in 1953, Nikita Khrushchev became leader of the Soviet Union. And in February 1956, he gave a famous “Secret Speech” denouncing Stalin’s repressive control of the country. This game-changing speech resulted in the liberalization of the arts in the Soviet Union. It’s likely that The Cranes are Flying, produced the following year, benefited from increased government openness to artistic expression.

Certainly the film achieved overseas acclaim in a way no Russian movie ever had before. It won the Palme d’Or at the 1958 Cannes Film Festival. As such, The Cranes Are Flying, together with the 1946 film, The Turning Point, hold the distinction of being the only Russian or Soviet winners of the Cannes Film Festival’s prestigious Palme d’Or prize.

The Cranes Are Flying is a remarkable film for its sublime cinematography, direction, and editing alone. However, it’s the acting that really makes it the masterpiece it is. Tatyana Samoylova plays the lead role, Veronika, with such authenticity and soul. It’s rare to meet someone who hasn’t wept at her moving final scene.

If you’re looking to watch a Soviet movie about the Second World War, look no further than this movie. It provides a multifaceted face to the Soviet wartime experience better than any other film.

The film begins in idyllic peacetime Moscow, where we meet two young lovers, Boris (Aleksey Batalov) and Veronika (Tatyana Samoylova). However, their dreamy time together soon hits a break with the outbreak of the German invasion of the Soviet Union.

Swept away with the surrounding patriotic fervor, Boris immediately volunteers to join the Red Army. However, he is soon killed in a swamp.

Meanwhile, in Moscow, German air raids are devastating the city. The people of Moscow take refuge in the city’s metro stations, but during one raid, Veronika’s parents refuse to leave their apartment. After the raid, Veronika returns to see their entire apartment building reduced to rubble.

Following the death of Veronika’s parents, Boris’s father, Fyodor Ivanovich (Vasiliy Merkurev) takes in Veronika as one of the family. At this time, neither Veronika nor Boris’s family know that he has been killed in action.

As soon as Veronika moves in with Boris’s family, it becomes clear that his brother, Mark (Aleksandr Shvorin), is in love with her. Mark keeps on pursuing Veronika, despite her rejections of him.

Mark’s pursuit of Veronika comes to a devastating head when he rapes her during an air raid. After that, she feels shamed into marrying him. Unaware of what is really going on, the rest of the family sees this as a betrayal of Boris.

Boris’s family relocates to the Urals

As the German advance continues, the family relocates away to the Urals. There, Veronika works in a military hospital alongside Boris’s family. Mark, meanwhile, shirks from any responsibility and spends his time partying.

At the hospital an injured soldier suffers a nervous breakdown when he learns that his girlfriend had left him while he was out at the front. Fyodor Ivanovich comforts the soldier and tells him to forget about her. Upon hearing this, Veronika runs out distraught.

Following the family’s rejection of Mark and embrace of Veronika, a comrade of Boris’s arrives and reports that Boris died in action. Veronika refuses to believe it, though.

Nevertheless, Veronika learns for herself that the news is true once the war has finished. During a celebration welcoming soldiers back home , Boris’s friend, Stepan (Valentin Zubkov), confirms the news to her. Veronika is devastated and weeps painfully, as she walks through the jubilant crowd. Her grief transforms into a smile, however, when Stepan speaks to the crowd and declares that those who died in the war will never be forgotten.