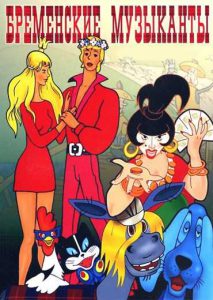 The Bremen Town Musicians is a musical cartoon based on the fairy tale recorded by the Brothers Grimm. The cartoon is a cult hit in the former Soviet Union largely because of its memorable musical numbers. A mix of folk and rock ‘n’ roll, the songs in film are catchy and instantly recognizable.

The plot of The Bremen Town Musicians focuses on the five travelling musicians, Donkey, Dog, Cat, Rooster, and the master Troubadour. After Troubadour falls in love with a princess, they run away together with the help of the troupe.

Watch the cartoon’s sequel here on Russian Film Hub – On the Trail of the Bremen Town Musicians.

This episode introduced the world to the now famous Bremen Town Musicians intro song, There is nothing better in the world! | Ничего на свете лучше нету!.