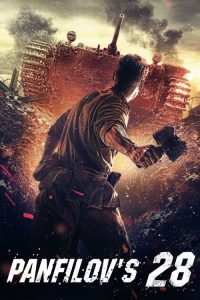 This is a pretty recent Russian WWII movie well worth checking out. It’s based on the Soviet legend about a group of 28 Red Army soldiers who heroically hold back a column of 54 Nazi Panzer tanks. This event – whether you believe it happened or not – is supposed to have occurred during the 1941 Battle of Moscow.

There are lot of famous, great Soviet movies about WWII, but there haven’t been too many recent Russian ones. As such, Panfilov’s 28 Men gives an interesting insight into how contemporary Russians view the events of the war.

Some detractors of the film label it as a heavily embellished tale made for propaganda purposes. However, many Russians respond testily to this claim. Russia’s culture minister has described anyone who questions the story as “scum” (source: BBC).

Undeniably, though, you could find the sort of heroism and bravery the film depicts in spades on the Eastern Front. And so, however completely accurate the film and its story may or may not be, you can be sure the character the actors are portraying is 100% representative of those Red Army soldiers long gone.