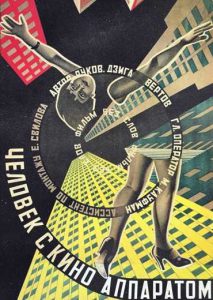 Man with a Movie Camera (Человек с кино-аппаратом / Chelovek s kino-apparatom) is a 1929 Soviet documentary, directed by Dziga Vertov. In 2012, a survey of almost one thousand film critics by the British Film Institute placed the documentary as the eighth greatest film of all time. Generally, the film is also considered the best documentary of all time.

The film shows urban life in the Soviet cities of Kiev, Kharkov, Moscow, and Odessa. There is no plot and there are no actors. Rather, the film shows everyday normal Soviet people working and at leisure.

Man with a Movie Camera is most well-known for the wide array of filmmaking techniques that Vertov invented and developed. The techniques he used in Man with a Movie Camera were a continuation of those he developed early in the 1920s in his documentary series, Kino Eye or Kino Glaz. Techniques like multiple exposure, fast and slow motion, jump cuts, Dutch angles, and split screens, were new at this time and owe much to Vertov’s early ingenuity.