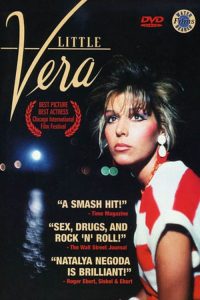 Little Vera (Маленькая Вера) is a Russian cult classic that you could call the Soviet Union’s Saturday Night Fever. No, not because of amazing dance scenes – though there are some. Rather, it’s because of the bleak life prospects and genuine, if not troubled romance of the main characters.

This is a movie that defines the mental prison many lived in during the late 1980s of the USSR. A rotting economy and decline in trust in the communist system left many young Soviets unsure of what authority they could rely on. Vera, the film’s main character, finds herself rebelling against Soviet laws, her parents’ will, and society’s expectations. Her journey towards some sort of self-fulfillment is both frustrating and incomplete.

To be sure, though, Little Vera isn’t all grey and dour. It’s really quite funny and entertaining. When Vera’s older brother aggressively tells his friend and Vera’s boyfriend, Andrei, that Vera is his sister, she drily remarks, “All people are brothers.” Meanwhile, the dance scenes are just fantastic and feature some sublime 80s Soviet electro pop.

Little Vera really is an excellent film. Definitely consider watching it. If you’re looking for the most iconic Russian film of the Perestroika era, this is it.