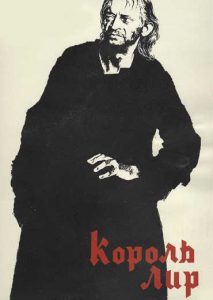 King Lear (Король Лир / Korol Lir) is a 1971 Soviet film adaptation of Shakespeare’s play. Based on a translation of the play by Boris Pasternak, the film is directed by Grigori Kozintsev and underscored by the music of Dmitri Shostakovich. As such, the film is a star-studded reunion from these three great Soviet artists’ 1964 film adaptation of Hamlet.

Many people miss out on Kozintsev’s films, unaware of how amazing they are. So, let me try to convince any Tarkovsky buffs out there that Kozintsev is worth watching. Jüri Järvet (King Lear) and Donatas Banionis (the Duke of Albany) would take up the lead roles in Solaris a year after shooting Lear. On top of that, there are many similarities between the directing and cinematography of Tarkovsky and Kozintsev (as well as Parajanov actually). So if you love Tarkovsky and Solaris, you’ll most likely adore King Lear.

King Lear decides to retire and divide his kingdom between his three daughters. To determine how much of the kingdom they each get, he asks them to say how much they love him. The eldest daughters, Gonerilla and Regan, shower the king with obsequious platitudes. However, Cordelia, the youngest daughter, refuses to flatter Lear, saying that her love is “richer than her tongue.”

Furious at Cordelia for not sugar-coating her words, King Lear angrily renounces her. He gives her no share of the kingdom, but instead sends her without dowry to be the King of France’s wife. He then divides the kingdom in two for Gonerilla and Regan, telling them he will visit them every month.

Having given away his kingdom to his two older daughters, Lear soon finds that their previous affirmations of love for him were empty words. They kick him out of their territory, leaving him to wander the land homeless.

Meanwhile, in a parallel to Lear’s familial situation, Edmund the illegitimate son of Gloucester plots against his father and legitimate half-brother, Edgar.

All the drama comes to a head after Cordelia returns to the kingdom with a French army to restore order. Edgar kills Edmund in a duel. Concurrently, Goneril and Regan kill themselves. Tragically, however, Cordelia is executed before justice is restored. The foolish, self-obsessed King Lear, standing over her body, dies of grief.