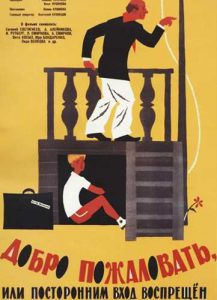 Welcome, or No Trespassing, is a true cult classic by the amazing director, Elem Klimov, of Come and See fame. Actually, amazingly this movie was Klimov’s first feature film and the diploma work that he submitted for this film school graduation.

Full of political satire on the abscesses of the Khrushchev era, the film was almost never released. While Klimov and his crew were busy filming in the south of Russia, they received a telegram from the State Committee for Cinematography demanding they halt the production. Nevertheless, Klimov persisted in his project and claimed to never have received such a message.

However, when the film was first screened to the film school commission, it was met with silence and accusations of being anti-Soviet. Such a bleak reception surely would have destined the film for a dusty life on the storage shelves of the state film archives. An unlikely savior, though, appeared in Khrushchev himself, a man who knew how to laugh at himself. With these exact words he gifted us all this incredible film and helped kick off Klimov extraordinary and sometimes controversial career.

“Why are you keeping this film? It’s ridiculous, after all, let it be distributed!”