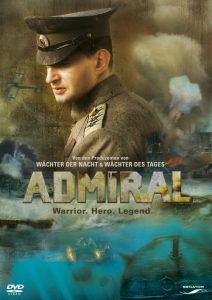 Admiral (Адмиралъ) is a Russian historical biopic film about the one-time leader of the White Russians, Alexander Kolchak. The film is directed by Andrei Kravchuk and stars one of contemporary Russia’s best-known actors, Konstantin Khabenskiy.

The events of the movie unfold in the period, 1915-1920. We are introduced to Kolchak, first as an admiral in the Imperial Russian navy during World War one. We then experience the collapse of the Russian Revolution, the Russian February and October revolutions, and subsequent Civil War.

After precariously outmaneuvering a German battle cruiser, Kolchak returns to the Kronstadt naval base near St. Petersburg. There, he is introduced to Anna Timireva, the wife of one of his junior officers. Though he and Anna are both married, their love for each other is obvious to them as well as their spouses.

Kolchak receives a promotion to become the commander of the Black Sea Fleet. And so, he and wife move to Sevastopol. It’s a fortunate move for him, as when the February Revolution of 1917 comes, all the officers in Kronstadt are executed. All of them, that is except for Anna and her husband.

After the February Revolution, Kolchak meets with the provisional head of the Russian government, Alexander Kerensky. Though Kerensky at first offers to name Kolchak Minister of Defense, the two have a falling out. Kerensky ends up exiling Kolchak.

Fast forward to 1919. Kolchak has returned to Russia and now commands the remaining White Russian-controlled region of Russia – Siberia. During an evacuation from Omsk to Irkutsk, Kolchak learns that Anna is working as a nurse near him. The two reunite and marry.

Not long after, the Bolsheviks assault Irkutsk. With the city clearly lost, the leaders of the French and Czechoslovak legions hand over Kolchak to the Bolsheviks. He is summarily executed, with his body dumped in the ice.