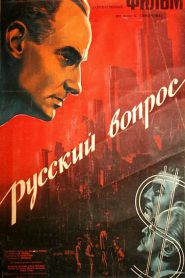 IMDb: 6.4 1948 91 min 1996 views
The Russian Question is a classic Soviet film by Mikhail Romm that throws audiences back to the dawn of the Cold War. Based on a play by ...
Drama

IMDb: 7.2 1941 100 min 1936 views
The spiritual and material misery of a group of people inhabiting the hotel of the title during the War.
DramaFree

IMDb: 6.6 1965 96 min 3216 views
The Hyperboloid of Engineer Garin is a rip-roaring communist, sci-fi adventure from 1965. It is based on the novel by Aleksey Tolstoy. The ...
AdventureDramaFreeScience Fiction

IMDb: 6.9 1941 100 min 1996 views
Primarily a biographical documentary about the military career of Alexander Vasilvich Suvorov, who was Field Marshal of the armies of Catherine ...
DramaFreeHistory

IMDb: 7.0 1939 110 min 1868 views
Minin and Pozharsky is a historical epic created by rock stars of the Soviet cultural establishment. The creator of the story, Viktor Shklovsky, ...
DramaFreeHistory