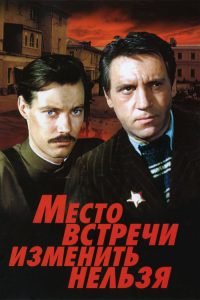 The Meeting Place Cannot Be Changed is a Soviet five-part television film based on the Weiner brothers’ story The Era of Mercy.

The show takes place after WWII, when a young Red Army officer, Volodya Sharapov, returns to Moscow to work as a detective. Soon enough, Volodya meets Gleb Zheglov (played by Soviet superstar, Vladimir Vysotsky), the chief of the squad fighting organized crime. Together they track down the “Black Cat” (Черная кошка) – a real life gang – that is terrorizing Moscow.