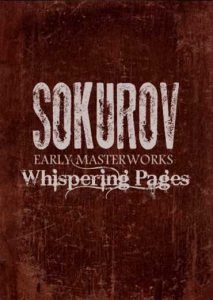 Whispering Pages is an existential drama based on Russian prose of the 19th century, in particular, Dostoevsky’s Crime and Punishment. The great director, Alexander Sokurov, translates the atmosphere of this novel into film, masterfully maintaining Dostoevsky’s intrigue.

The hero of the film, an anonymous man in a somnambulistic state, wanders around through decomposing, fog-enshrouded St. Petersburg. Along the way he encounters a series of insulted and humiliated characters, including a holy prostitute and a Kafkaesque bureaucrat.

The visuals of Whispering Pages are striking. It looks as if the film was somehow shot before the invention of cinema, during an archaic pre-time in a yet uncreated space. Part of the reason for this is Sokurov’s obsession with trying to make films look flat, based on the principle that cinema is really just like a painting. For an unforgettable visual experience, definitely consider watching this film.