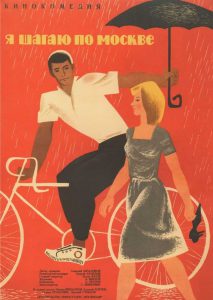 “I Am Walking Along Moscow” aka “Ya Shagayu Po Moskve” (1963) is a charming lyrical comedy directed by Georgi Daneliya in 1963 that was nominated for Golden Palm at Cannes Film Festival. Daneliya proved that it is possible to create a masterpiece in the most difficult genre of romantic comedy. Made by the team of young and incredibly talented artists that besides Daneliya included writer/poet Gennady Shpalikov, composer Andrei Petrov, and cinematographer Vadim Yusov (who had made four films with Andrei Tarkovski), and the dream cast of the talented actors even in the smaller cameos, “I Am Walking Along Moscow” keeps walking victoriously through the decades remaining deservingly one of the best and most beloved Russian comedies and simply one of the best Russian movies ever made. Funny and gentle, dreamy and humorous, romantic and realistic, the film is blessed with the eternal youth and will always take to the walk on the streets of Moscow new generations of the grateful viewers. 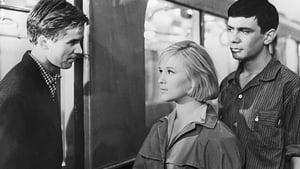