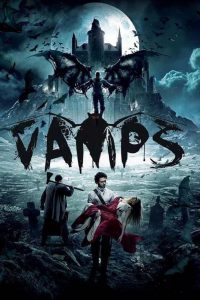 Vamps (Вурдалаки), also known as Ghouls, is a Russian gothic horror film set in the Carpathian Mountains by Transylvania in the 18th century. The film’s plot is based on a story by Aleksey Tolstoy, the great Russian science fiction writer from the early 20th century. The story revolves around a high up St. Petersburg character, Lavr, who is exiled to the Carpathian Mountains, right on the edge of the Russian Empire, bordering present day Romania. Lavr previously occupied a rarified position in imperial Russian society – he was a monk who served as Empress Elizabeth’s confessor. However, his violent temper and erratic behavior proved too much for St. Petersburg court etiquette, so he was expelled from the capital at age eighteen.

In the mountains at the edge of the empire, Lavr finds himself very far away from the sophistication and rationality of Age of Enlightenment St. Petersburg. Soon, he realizes he is faced with something supernatural that goes beyond the boundaries of human understanding. He must go up against an inexplicable horror that will test his strength and character. Watch Vamps to see what horrors await!