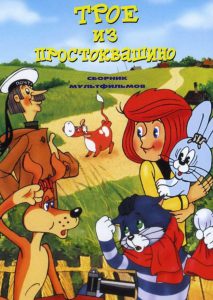 Three from Prostokvashino (Трое из Простоквашино / Troye iz Prostokvashino) is a popular Soviet hand-drawn cartoon series. This first episode is from 1978 and introduces us to the characters Uncle Fyodor, Matroskin the cat, and the dog Sharik.

You can watch all three episodes here. Each of the episodes runs a little under 20 minutes.

The series is a source of many popular quotations in the former Soviet Union. What’s more, the most popular dairy brand in Russia (see here) gets its name from this cartoon!

The story is based on the children’s book, Uncle Fedya, His Dog, and His Cat. In it, an interdependent young city boy, Uncle Fyodor, runs away from his parents’ house with his new pet and friend, the talking cat Matroskin. They come to the village of Prostokvashino (meaning soured milk in Russian), where they get acquainted with the local dog Sharik. Sharik points them to a free house, and the three of them move in together.

Fedya’s upset parents soon place an ad in the newspaper about their missing child. The local postman, Pechkin, sees the missing person ad and reports Fedya’s whereabouts. The movie ends with Fedya and his parents reunited and the postman Pechkin receiving a reward. 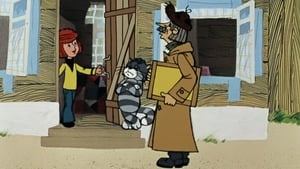