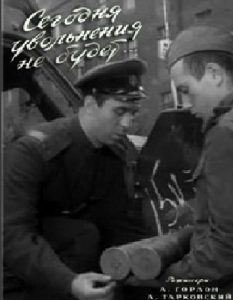 This short film is a stylishly constructed thriller that will appeal to a wide range of viewers.

It tells the story of a small Soviet town that finds a stockpile of lost WWII bombshells during routine roadworks. While the town is evacuated, a group of soldiers work to safely disable the explosive shells under tense conditions. You’ll be biting your nails halfway through.

For many the appeal of this movie is viewing one of Andrei Tarkovsky’s first works while he was a student. Interestingly enough, there’s very little of the Tarkovsky we know and love from his feature films in this, though. The cinematography and editing are quite traditional for Soviet films (and Hollywood movies as well) of the period.

If you’re interested in checking out another Tarkovsky student film, The Killers (1956) makes for an entertaining watch. Unlike There Will Be No Leave Today, Tarkovsky himself acts in it!