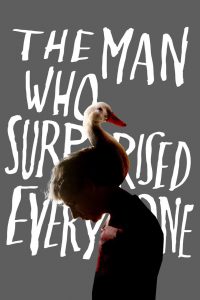 The Man Who Surprised Everyone

The Man Who Surprised Everyone (Человек, который удивил всех) is a Russian film about a Siberian hunter who tries to cheat death by recreating a legend of old.

Egor is a virtuous hunter who lives happily with his wife and son in the Siberian hinterland. Their family is filled with excited anticipation for the arrival of their second child. However, their joy soon turns to worry after Egor is diagnosed with a fatal illness.

After trying out both conventional medicine and shamanic rites, Egor still isn’t getting better. And so, he decides to pursue an unusual method for battling his illness. Copying the mythical Siberian story of Zhamba, a man who cheats death by becoming a duck, Egor complately changes his personality to leave his human form behind.

Will Egor beat his illness or will the pressure of public opinion force him to capitulate? Watch The Man Who Surprised Everyone to find out.