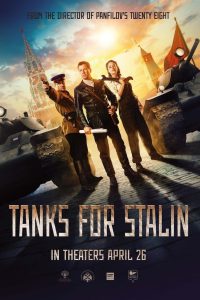 Tanks for Stalin (Танки) is a Russian movie about WWII from Kim Druzhinin, the director who gave us Panfilov’s 28 Men. The year is 1940 and tensions in Eastern Europe are becoming increasingly tense. The Soviet government foresees the inevitability of war with Nazi Germany and begins to prepare for it intensively. Meanwhile, in Kharkov, the talented engineer, Mikhail Koshkin, completing work on his brainchild – the innovative A-34 tank (the future legendary T-34). He has already created two experimental prototypes, but the tank is not ready to launch into mass production, since it hasn’t been properly tested yet. Nevertheless, confident in the capabilities of his design, Koshkin proposes an adventurous solution. Together with his team, he will ferry experimental samples to Moscow, where he will present them to the country’s leadership. However, the Germans find out about the secret development of the Russians, and do everything they can to prevent the tank samples from reaching Moscow. Watch Tanks for Stalin to witness a grueling race across the Soviet Union to deliver crucial machinery to Comrade Stalin.

If you’re interested in Tanks for Stalin, you should definitely check out our list of the best Russian and Soviet war movies. And if you’d like to watch another great Russian movie about the remarkable Soviet tanks of WWII, we highly recommend T-34. The two movies came out the same year and deal with the history of the much celebrated, much feared T-34 tank.