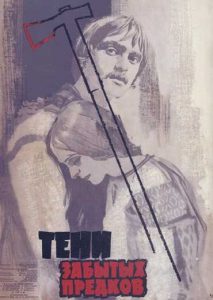 Shadows of Forgotten Ancestors is a 1965 Ukrainian film by Soviet-Armenian filmmaker, Sergei Parajanov, that is based on the novel by Ukrainian writer, Mykhailo Kotsiubynsky. This haunting film is full of deeply moving imagery and gives a detailed portrayal of Ukrainian culture in the Carpathians. It was Parajanov’s first major work and earned him international acclaim. To this day it is remembered as an art house favorite as well as one of the relatively few Soviet movies to be produced in Ukrainian.

The film explores the lives of a particular subgroup of Ukrainians who have long lived in the Carpathian mountains in the west – the Hutsuls. Their land had long been controlled by different foreign powers; yet, despite this, they succeeded in preserving their own unique identity, language, and customs.

If you like this film, you’ll love Parajanov’s greatest masterpiece, The Color of Pomegranates.

Shadows of Forgotten Ancestors tells the story of two old Hutsul clans in the middle of a long rivalry. However, a forbidden romance blossoms. A young man from one of the clans, Ivan, falls for Marichka, the daughter of his father’s killer.

Soon, though, Marichka drowns and Ivan is left grieving for months. Even when he is married off to a local girl from his clan, Palagna, he can’t forgot his lost love.

Palagna desperately wants children and so enlists the help of a sorcerer to lure Ivan to her. However, in the process she herself comes under the sorcerer’s spell. She humiliates Ivan who then fights the sorcerer to restore order to the community.