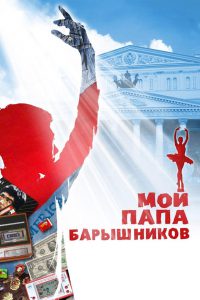 My Dad Baryshnikov (Мой папа – Барышников) is a fun Russian comedy about a young dance student who is convinced that his father is the famous choreographer, Mikhail Baryshnikov. Set in the middle of Perestroika, the main character, Borya Fishkin, studies at the Moscow Choreographic School at the Bolshoi Theater. Borya’s life is honestly not great. He is a clumsy young man who struggles to progress with ballet. Meanwhile, classmates and girls barely notice him. That is until a rumor spreads through the school that the inconspicuous Borya is in fact the illegitimate son of an acclaimed dancer – Mikhail Baryshnikov. The rumor does have some basis in truth. Borya’s mother was personally acquainted with the dancer and, what’s more, the young man does have a striking resemblance to the star. However, only just when Borya is really starting to believe these tantalizing rumors does he learn who his real father is, and that he has just recently been released from prison. Watch My Dad Baryshnikov to witness a life-affirming tale that will keep you smiling for some time.