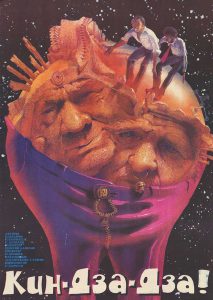 The story takes place on the desert planet “Pluke” in the “Kin-dza-dza” galaxy, where two Soviet humans previously unknown to each other (“Uncle Vova”, a gruff construction foreman from Moscow, and “The Fiddler”, a student from Georgia) are stranded due to an accidental encounter with an alien teleportation device. The movie describes their long quest to find a way back home.