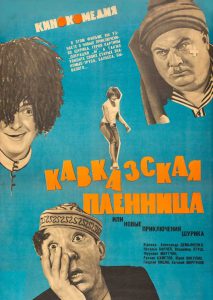 Kidnapping, Caucasian Style (Кавказская пленница / Kavkazskaya plennitsa) is a 1967 Soviet comedy by prolific director, Leonid Gaidai. The title and plot are references to two literary works both titled, The Prisoner of the Caucausus – one by Alexander Pushkin’s poem, one by Leo Tolstoy. The plot of the movie centers around an old Caucasus tradition of bride kidnapping.

The film is the second major feature film by Leonid Gaidai. It follows on the success of Operation Y two years prior and features many of the same characters. Aleksandr Demyanenko reprises his role of Shurik and the criminal trio of Yuriy Nikulin, Georgiy Vitsin, and Yevgeni Morgunov return to screen together as bandits.

The very same naive Shurik from Operation Y is taking a trip in the Caucasus to learn about local customs. There, he meets a beautiful young woman, Nina, who is the perfect young communist. She is intelligent, an athlete, and a member of the Komsomol.

Unbeknownst to Nina, her uncle has agreed to sell her hand in marriage to the wealthiest man in town, Saakhov. However, knowing that Nina would refuse his proposal, Saakov conspires to kidnap her. So, he hires the trio of criminals (again from Operation Y) the Fool (Балбес), Coward (Трус) and Stager (Бывалый).

The criminals have a hard time getting to Nina because she has started to spend so much time with Shurik. And so, they decide to trick Shurik into helping them. They tell him that Nina loves Saakhov and wants to be kidnapped per local custom. Although this devastates Shurik, who is now in love with Nina, he agrees to help her out.

However, after Saakhov’s henchmen have Shurik carted off to a psychiatric ward, he realizes he has been fooled. He then escapes to help set Nina free. Eventually, he and Nina defeat the criminals. Though, not before Nina still thinks that Shurik is still part of her abduction.

Two songs from Kidnapping, Caucasian Style have become household tunes in the former Soviet Union. The first is A Little Song About Bears (Песенка о медведях / Pesenka o medvedyakh); the second is If I Were a Sultan (Если б я был султан / Yesli b’ ya byl sultan).

You can listen to A Little Song About Bears here and to If I Were a Sultan here. 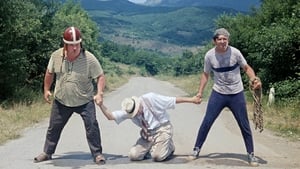