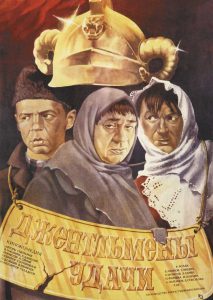 Gentlemen of Fortune (Джентльмены удачи / Dzhentlmeny udachi) is a 1971 film directed by Aleksandr Sery. It’s one of the most popular Soviet comedies of all time with over 65 million box office views. And yet, the movie almost didn’t make it to the big screen. The Soviet security services generally viewed the production of the film very positively. The film even made the Minister of Internal Affairs Nikolay Shchelokov laugh to tears. However, because of all its prison jargon, the movie did not receive a green light until Leonid Brezhnev had seen it.

The movie begins in Central Asia. There, three criminals steal the golden helmet of Alexander the Great from an archaeological dig. Back in Moscow, the devastated dig leader, Professor Nikolai Maltsev (Erast Garin), bumps into a man who is the spitting image of the leader of the criminals who stole the helmet.

However, this man whom the professor spots is not the cruel, dangerous criminal leader, Alexander Bely (Evgeni Leonov). Instead, it is his doppelganger, Evgeni Troshkin (Evgeni Leonov), a kindhearted kindergarten teacher.

Once the mistaken identity confusion is resolved, the police come up with a hilarious solution to the helmet theft. You see, although by this stage all three criminals are behind bars, they have refused to give up the location of the helmet. And so, the police convince Evgeni the kind teacher to impersonate his criminal doppelganger.

The police tell the two criminal accomplices that their boss has hit his head and partially lost his memory. They then send the kindergarten teacher to replace him in their prison.

After successfully convincing the criminals he is their boss, the teacher escapes with them to Moscow. However, before long, their suspicions are raised and they realize he is working with the police.

Even worse, the real criminal boss has broke out of his prison and reunites with his henchmen. And, predictably, things get a whole lot more complicated.

All in all, this is a good old comedy, full to the brim with mistaken identity, that is well worth watching.