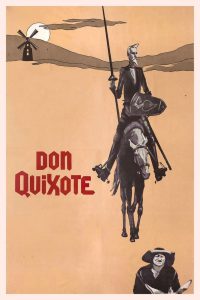 Don Quixote is a superb Soviet film adaptation of the Cervantes novel of the same name. The film is a creation of brilliant director, Grigori Kozintsev. Within a few years, he would go on to direct two more stellar foreign literature adaptations – the Shakespeare plays, King Lear and Hamlet.

Don Quixote tells the store of Senor Quexana, a man who is so overwhelmed by books on chivalry that he believes that he himself is the brave knight, Don Quixote de la Mancha. And so, this self-appointed Don Quixote sets off on adventure. Along the way, he rides on his horse and is accompanied by his loyal squire, Sancho Panza on a mule.

Soon the valiant pair mistakenly save the Lady Altisidora from danger. She is so amused by their antics that she invites them to visit the Duke, thinking the bizarre duo will give his court some merriment. Later, Don Quixote performs some more memorable deeds, including freeing some prisoners who then attack him, and attacking a windmill, as he is convinced that it is actually some monstrous wizard.