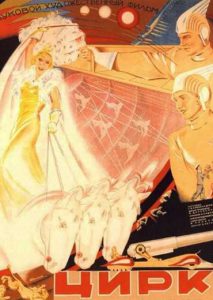 Circus was released in the summer of 1936 and met immediate success with Soviet audiences. The film resonated with an increasingly confident public’s view that there was something special and just about the Soviet Union, particularly in contrast to ideological rivals, like the US and Germany.

The movie tells the story of an american circus star, Marion, who starts a new life in the Soviet Union after falling victim to the racism she experiences in the US. Becoming pregnant with a black man’s child, she is persecuted and effectively banished from her own country. Things aren’t immediately great for her in the Soviet Union, though. Her German ringmaster is rapaciously in love with her and threatens to divulge her secret unless she marries him. However, Marion has fallen in love with a Russian acrobat already. You have to watch this movie to see how Marion’s fate ends! Spoiler alert – the love of the Soviet people for all humanity triumphs over the racism of the US and German ringmaster.

If you enjoy Circus, you should consider checking out some other wonderful Soviet musicals. Grigori Aleksandrov, Circus’s director, also created the popular and fun movies, Volga-Volga and Jolly Fellows.