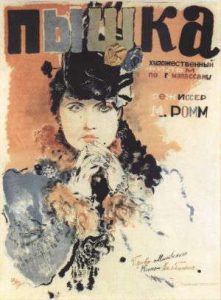 Boule de Suif (Пышка) is a 1934 Soviet drama by Mikhail Romm. An adaptation of the eponymous short story by Guy de Maupassant, Boule de Suif is a beautifully made film about hypocrisy and selfishness.

The film is set during the Franco-Prussian war. A group of French capitalists, aristocrats, and nuns makes a trip from Rouen to Havre while war rages. On their way, they are joined by Frau Boule-de-suif. One of the party immediately recognizes her as a prostitute. And so, the travelers pour scorn on her. That is, until she produces enough food to feed their hungry, judgmental mouths for a week. Then they quickly forget their prejudices.

The troop next stops at a hotel, where a Prussian officer demands their papers. He too recognizes Frau Boule-de-suif and insists she become his mistress. However, our heroine detests Prussians and so refuses. However, he tells her the group of travelers cannot continue their trip unless she changes her mind…

This film is is wonderful study in hypocrisy. Helped by excellent actors and spot-on cinematography, director Mikhail Romm has produced a film that continues to be worth watching today.